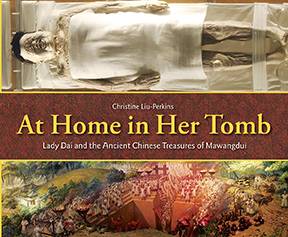 At Home in Her Tomb

Lady Dai and the Ancient Chinese Treasures of Mawangdui

This teaching guide offers ten learning activities related to At Home in Her Tomb: Lady Dai and the Ancient Chinese Treasures of Mawangdui:

Included are further Resources on Mawangdui to explore with students:

Time lines help us understand the chronological order of events in relation to each other. While researching Mawangdui, I constructed several time lines, including the “Time Line of the Qin and Early Han Dynasties” (pages 72-73).

Chapters 2-6 each open with a double spread depicting an imagined scene: an illustration on the left page and text on the right page. The More Notes about Imagined Scenes page on my website explains how details of the illustrations and narratives were drawn from the Mawangdui tombs and other historical sources.

The son’s tomb contained a library box of maps and books on medicine, history, politics, natural phenomena, and military strategy.

Lady Dai’s body did not go through the full process of decomposition. Discuss with students:  what changes do bodies usually undergo in death and decomposition?

“Chapter 1: Excavation of a Time Capsule” reveals what it was like to discover what was hidden inside the Mawangdui tombs. It can serve as a mentor text for students to write about other archaeological sites.

Lady Dai is an unusual type of preserved body, but there are many other types.

Besides tombs, what are other kinds of memorials that people create to honor the dead? (These can include buildings, charitable donations, scholarships, museum collections, books, plaques, shrines, parks, art pieces, trees or gardens, documentary films, etc.)

Identifying who was buried at Mawangdui and the artifacts in the tombs required the archaeologists and other experts to make inquiries and solve problems. Discuss with students:

The museum’s introduction to the Mawangdui exhibition has descriptions and photographs of the excavations and artifacts, as well as information about the family of Lady Dai.

Further details are given about individual artifacts in the museum’s collection, including lacquerware, silk, books, and more.

Bonn-Muller, Eti. “Entombed in Style: The Lavish Afterlife of a Chinese Noblewoman.” Archaeology 62, no. 3, May/June (2009): 40-43. [Full article pdf on Bonn-Muller’s website, text in EBSCOhost database, or a short version on Archaeology‘s website.] Article about Lady Dai’s tomb publicizing a 2009 exhibit of Mawangdui artifacts at the China Institute in New York City. Grades 6 and up.

Buck, David D. “Three Han Dynasty Tombs at Ma-Wang-Tui.” World Archaeology 7, no. 1 (1975): 30-45.  [Article in JSTOR database or here.] Quite a complete summary with good line drawings of the tomb site and feiyi silk painting. Grades 7 and up.

Chow, Fong, and Cheng Yeh. “A Brief Report on the Excavation of Han Tomb No. 1 at Ma-wang-tui, Ch’ang-sha.” Artibus Asiae 35, no. 1/2 (1973): 15-24.  [Article in JSTOR database.] Details of the tomb dimensions and numbers of artifacts. Includes a brief history of the four generations who held the title Marquis of Tai/Dai. Grades 10 and up.

Bahn, Paul. “The Wife of the Marquis of Dai.” In Written in Bones: How Human Remains Unlock the Secrets of the Dead, 51-55. Toronto: Firefly Books, 2003. A summary of Lady Dai and her tomb for Grades 7 and up, with six photos.

Editors of Time-Life Books. “A Woman out of the Past.” In China’s Buried Kingdoms, 145-157. Alexandria, VA: Time-Life Books, 1993. A colorful introduction—rich with photographs—to Lady Dai and her tomb. Grades 7 and up.

Pirazzoli-t’Serstevens, Michèle. “Life in This World and the Next: The Mawangdui Tombs.” In The Han Dynasty, translated by Janet Seligman, 41-60 and 226. New York: Rizzoli, 1982. Good information about the three Mawangdui tombs and about Han life. Includes large photographs. Grades 7 and up.

Qian Hao, Chen Heyi, and Ru Suichu. “The Han Tombs at Mawangdui, Changsha: Underground Home of an Aristocratic Family.” In Out of China’s Earth: Archeological Discoveries in the People’s Republic of China, 86-125. New York: Harry N. Abrams and China Pictorial, 1981. Detailed introduction to the three Mawangdui tombs and artifacts with plenty of photographs. Grades 7 and up.

Werning, Jeanette. “Mummies in China.” In Mummies of the World, edited by Alfried Wieczorek and Wilfried Rosendahl, 126-137. Munich: Prestel, 2010. Information about Chinese mummies, including Lady Dai. Also discusses philosophies of death and practices for preserving bodies. Grades 8 and up.

Yu Yanjiao. “A Legend That Will Live Forever: An Introduction to the Han Tombs at Mawangdui.” In Noble Tombs at Mawangdui: Art and Life of the Changsha Kingdom, Third Century BCE. to First Century CE., edited by Chen Jianming, 1-16. Changsha, China: Yuelu Publishing House, 2008. Good introduction to the three tombs, their artifacts, and the Li family. Many photographs. The entire book was produced by the Hunan Provincial Museum, home of the Mawangdui artifacts. Grades 8 and up.

Peng Long-xiang, and Wu Zhong-bi. “The Mawangtui-Type Cadavers in China.” In Mummies, Disease & Ancient Cultures, edited by Aidan Cockburn, Eve Cockburn and Theodore A. Reyman, 328-35. Cambridge, U.K.: Cambridge University Press, 1998. Dr. Peng led the autopsy of Lady Dai’s body. This chapter is great for students interested in the biology of what made her body’s condition unique. Grades 9 and up.

Terrific documentary footage and interviews with the archaeological team about the Mawangdui tombs—in Mandarin with English subtitles (24 minutes).

Berger, Melvin & Gilda Berger. Mummies of the Pharaohs: Exploring the Valley of the Kings. Washington, D.C.: National Geographic. Gorgeous photographs and biographical explorations of several pharoahs and their tombs, including a detailed account of Howard Carter’s discovery of King Tutankhamen’s tomb. Grades 4-7.

Hawass, Zahi. The Curse of the Pharoahs: My Adventures with Mummies. Washington, D.C.: National Geographic, 2004. A famous Egyptian archaeologist writes about his work. Grades 5 and up.

Deem, James M. Faces from the Past: Forgotten People of North America. New York: Houghton Mifflin Harcourt, 2012. Detailed accounts of reconstructing the faces and histories of unknown people from their remains. Grades 6 and up.

Archaeology. A magazine and website of the Archaeological Institute of America. Grades 6 and up.

Hunt, Patrick. Ten Discoveries that Rewrote History. New York: Plume, 2007. The discoveries and revelations of key prehistoric and ancient sites. Grades 7 and up.

Bahn, Paul (Ed.). Written in Bones: How Human Remains Unlock the Secrets of the Dead. Toronto: Firefly Books, 2003. Three dozen case studies reveal what can be learned from human remains from around the world, prehistoric to 19th century. Grades 7 and up.

Fagan, Brian M. (Ed.). Eyewitness to Discovery: First-Person Accounts of More Than Fifty of the World’s Greatest Archaeological Discoveries.  Oxford: Oxford University Press, 1997. Introductions to major finds from the archaeologists themselves. Grades 9 and up.

Reagan, Maggie. “Classroom Connections: Death and Burial Across Cultures.” This article in the January 2016 issue of Book Links includes annotations of children’s books on mummies from around the world.

Tanaka, Shelley. Mummies: The Newest, Coolest, and Creepiest from Around the World. New York: Abrams, 2005. Grades 3-5.

Bahn, Paul (Ed.). Written in Bones: How Human Remains Unlock the Secrets of the Dead. Toronto: Firefly Books, 2003. Grades 7 and up.

This teaching guide was prepared by Christine Liu-Perkins
At Home in Her Tomb: Lady Dai and the Ancient Chinese Treasures of Mawangdui
(Charlesbridge, 2014)
www.ChristineLiuPerkins.com